How You Can Use GPS to Make Art 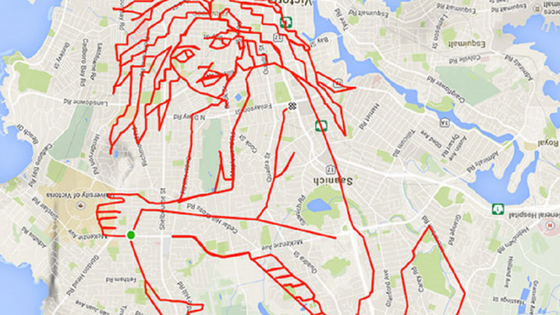 It’s difficult, sweaty work, but a gym session is supposed to make you feel confident, look good, and give you the probably undeserved excuse to talk about how much better you are than everyone else.

But how can we make exercise great? Exciting? Not a complete pain? The usual solutions for making something more fun aren’t good choices here, because they’re sort of antithetical to the whole point of dragging yourself to a treadmill in the first place. Alcohol? No. A pizza? No. A big hat? Possibly, but only if you can really own it.

Here’s a possible answer, then: turn your exertions into art. And not in the way that dance or figure skating is art; those are well and good, but most of us don’t have that kind of talent, and it’s too late to ask our moms to sign us up for classes, anyway.

If you’re willing to step out of the limitations of a gym and hit the streets for a good run or bicycle trip, though, GPS provides the solution. With the city as your canvas and your feet as the brush, tracking technology is yours to use as both a practical tool and a high-tech means of self-expression.

And if that self-expression involves a bit of NSFW imagery, all the better. Allow nobody to stand in the way of your artistic vision!

It’s all about where you run

The rise of the smartphone has revolutionized the layman’s fitness regime, offering a ridiculous number of apps that can be used to measure, quantify, and track your progress in all sorts of ways. With GPS locating, one perk is the ability to map out the routes you take along city streets in order to monitor the distance covered, keep an eye on your speed, and make sure you know how to get home without accidentally crossing the International Date Line.

Let’s put two and two together and consider the inevitable consequence of this development: technology visually tracing your movement in the palm of your hand, and man’s boundless desire to mess with technology as best it can because it can.

We’re talking about map drawing, folks. If you’re going to devote an hour of your life to hitting the pavement, you may as well get more out of it than a lot of heavy breathing and sore calves, right?

Why? Because we can

Using travel patterns to make shapes more interesting than a straight line is apparently inherent to the human condition because we’ve been doing it for a while. There is, of course, the act of skywriting, which pilots have been dabbling in since we were able to get into the air for longer than 10 seconds at a time (some sources say that it started as early as 1919).

Once the technology became available, though, captains started taking their ideas to a digital landscape. Going several hundred miles out of your way and delaying your arrival time by four hours obviously isn’t doing your airline (or perpetually impatient passengers) any favors, so pilots wait to indulge in their creative sensibilities until they’re out flying solo, whether it’s to calibrate landing systems, train new pilots, complete an aerial land survey, or conduct an endurance test on a new craft. Then, the sky is — ahem — the limit: write out some words like Boeing decided to do during a 737 test flight, draw a plane with your plane like both a small plane pilot and a Boeing test pilot did, or just be immature about it (we won’t show that one) like another pilot did, because we’re all still middle-schoolers at heart.

Art for even the most uncreative

Thanks to smartphones, however, this particular art form is no longer the plaything of large aerospace companies and a privileged few who can afford their own plane. It’s now in the hands of the common folk, and we’re just as creative and sometimes irresponsible with it as the professional test pilots and private pilots are!

Using apps like RunKeeper, Strava, and Nike+, those of us who are more dedicated to cardio (healthy, perhaps, but at what cost?) can get the heart rate up while also tracing out whatever shapes come to mind. It’s certainly a commitment: some of these trips can require dozens of miles and some serious planning since you’ve got to get your image to work around what streets and roads are actually available unless you plan on sprinting through someone’s backyard.

And thanks to many of these applications’ social media connectivity, the lack of tangible results isn’t an issue; Strava, for instance, has a Facebook-like interactivity built into it that lets you share pictures and comment on profiles. It’s become enough of a trend that Old Spice ran an ad campaign a couple of years ago in which the company would send submitters a physical gift shaped like whatever picture they managed to draw. And once Old Spice gets its hands on something, you know it’s cool.

Let’s get physical with it

The takeaway here is that human beings will find self-expression and beauty in anything and everything. Or maybe it’s that we’ll do anything to make running seem less boring, because wow is it tedious, although I’ve heard that some people claim they love it. Personally, I’m not buying it, but I digress.

In either case, it’s nice to know that we’re still finding simple pleasures in the everyday. And that we can sculpt our glutes while making San Francisco look like a turkey.

What do you think? Would you ever use your fitness app to create art? Or like me, do you find running about as fun as watching paint dry? Let us know in the comments below.