Are GPS-Style Smart Boots the Next Tracking Solution? 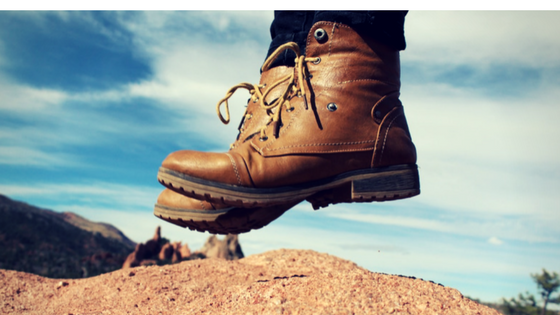 For better or worse, GPS technology has become a constant in American life; something once designed for and regulated to military use is now as common to our day to day as a cup of coffee. From asking Siri to lead us home to using Google to find the Walmart closest to us, the technology has come a long way since NASA’s first satellite was sent up.

So, where do we go from here?

Even if it has become a ubiquitous feature of any and all smartphones, there’s still plenty of room for improvement with consumer GPS. Its most obvious flaw is more or less the same one that the system has had to try to improve since its inception: inconsistent accuracy. New satellites (and more of them) have sharpened the precision of tracking ability to near pinpoint accuracy when it comes to larger objects — businesses, vehicles of all sorts — but still struggles when attempting to work at the next logical step: tracking users themselves.

Here’s the pitch, then: wearable GPS. On your feet. A few questions may immediately spring to mind here, but before you say anything, let us get ahead of them, one at a time.

Of course! Using GPS to monitor individuals is not some newfangled concept that’s only just been considered. The concept was being explored as early as the mid-1960s, though it wasn’t until the widespread adoption of nationwide cellular and Internet networks in the early 1990s that the technology could be used the way it is now. Before, use was restricted to law enforcement and military parties, and was limited to fairly basic tasks, such as ensuring prisoners did not leave their designated confinement spaces.

Since then, of course, use of the system has ballooned to include a scale that is much less insular (from a single home to the entire globe), public accessibility, and all manner of private and commercial operations. Perhaps the most obvious one is the ever-increasing popularity of tracking bracelets for criminal offenders, as we looked at some weeks ago.

Then what else is there to develop?

First of all: we don’t appreciate your tone. Second, as the aforementioned post discusses, GPS has its limitations, particularly in rural areas where satellite reception is weak. Even with a strong signal, however, the system can develop hiccups when it attempts to locate something indoors. Because GPS works best when a device has a clear line of sight to the sky, information gets distorted or lost entirely when someone is in a building, which can be particularly dangerous if location is important for emergency services or triggering certain alerts.

What’s the solution, then?

We’re so glad you asked. Let’s return to our pitch from earlier: wearable GPS. Rather than taking the form of a bulky ankle accessory, however, this new form — shoe attachments — would be much less intrusive.

There are two directions that developers are currently taking this idea: one that tries to circumvent traditional tracking shortcomings entirely, and another that tries to adapt them as best it can. Let’s break them both down:

First, the more ambitious concept. A research team at the University of Utah has developed a rather unfashionable prototype boot that uses an IMU (inertial measurement unit) pressure sensor in the heel to track one’s footsteps. Containing a gyroscope, magnetometer, and accelerometer, this kind of technology is used by airplane pilots for navigation and can mark the wearer’s location to within 15 feet without GPS.

Right now, the technology is limited to a rough, awkward-looking prototype with a circuit board poking out of the heel that has to be attached to a portable computer to map out the data. But the developers are confident that, with time, they will be able to develop a much more streamlined product: one that can be neatly kept inside a shoe and will be able to use Bluetooth connectivity. Free from its satellite tethers, this advancement could make exact locating a much more universal possibility.

If one isn’t inclined to wait for that particular option to become commercially viable, there is a less revolutionary product available already: smart soles. Several different companies are beginning to offer slip-in insoles that can be put into any type of shoe and synced to a smartphone. Some of these include all kinds of fancy features, from being able to direct you towards a chosen destination by vibrating when you reach a turn, to tracking all manner of physical data, such as the number of steps you’re taking and the length of your stride. It’s a concept that has stretched to include actual shoes and even socks, with real-time tracking and constant updates.

Of course, these do come with some caveats. Such brands require a connection to cellular networks in order to function, and need to be regularly charged; some daily, others weekly. As a result, their accuracy will vary, depending on reception, geographic location, and just how detailed you need the results to be.

Still, it gives us forward-thinkers something to try while we wait for the folks in Utah to get working!

What would these be useful for?

Let’s ignore the Big Brother-esque vibes that we’re all getting right now and consider the good this technology could do. As the Utah team has noted, these shoes could be used to help rescue workers navigate buildings or find team members, while the commercially available options can already help keep track of the elderly, locate lost hikers, navigate tourists in a foreign city, or keep runners moving at their optimal speed and avoid injury.

GPS still has a long road ahead of it before it could be considered “optimal,” but it’s clear that we’re well on our way down that particular path. It’s only a matter of time before we reach the pinnacle of this particular invention, which will hopefully allow us to find our phones without needing, you know, our phones. An impossible dream, perhaps, but we’d really like to be able to find ours again. Maybe it’s in between the sofa cushions?

What do you think about GPS-style smart boots or GPS tracking inserts for your shoes? Leave your thoughts, concerns, and ideas for where GPS is headed in the comments section below.